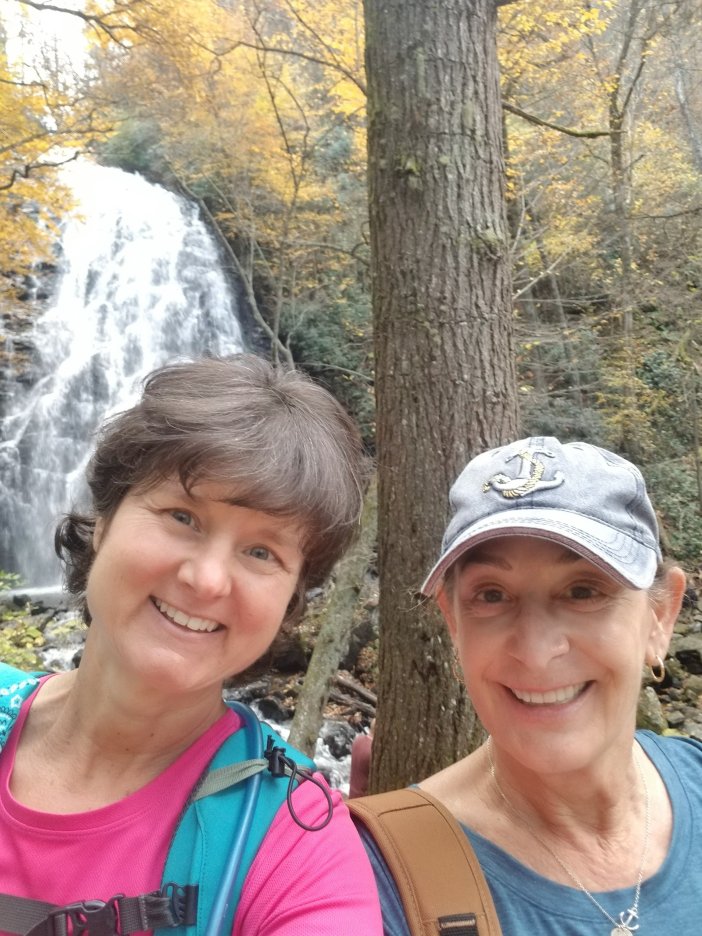 I picked up my friend, Pat from the Asheville airport on Friday and we drove up the Blue Ridge Parkway(BRP) to Crabtree Falls. The falls were beautiful with lots of water flow and the fall color. The hike to the falls was a very slow trudge behind a long line of slow people. It was really pretty annoying and not enjoyable at all. I felt like I was at Disney World waiting in line for a ride. Luckly it was a loop trail and the trail past the falls was very steep so most of the people were going back the way they came. I made Pat take the steep route so we could escape the crowds. The trip on the way back was much more enjoyable although the steep section was unbelivebly steep. We were grabbing anything we could get our hands on to pull ourselves up. We looked like Spiderman scaling a wall. We both made it up safely and Burkley seemed to have no trouble at all. 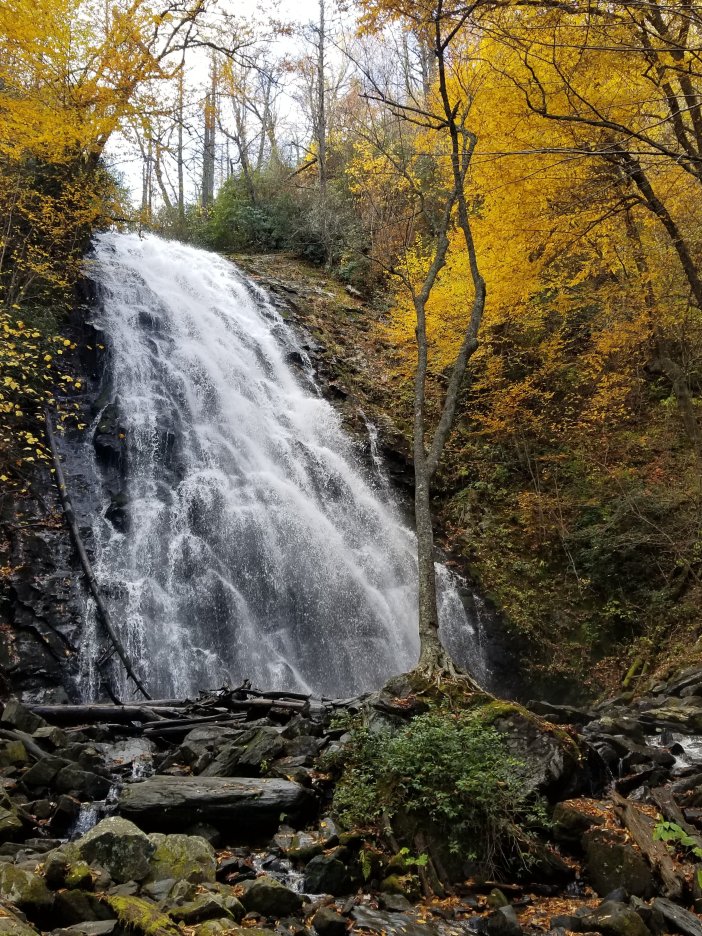 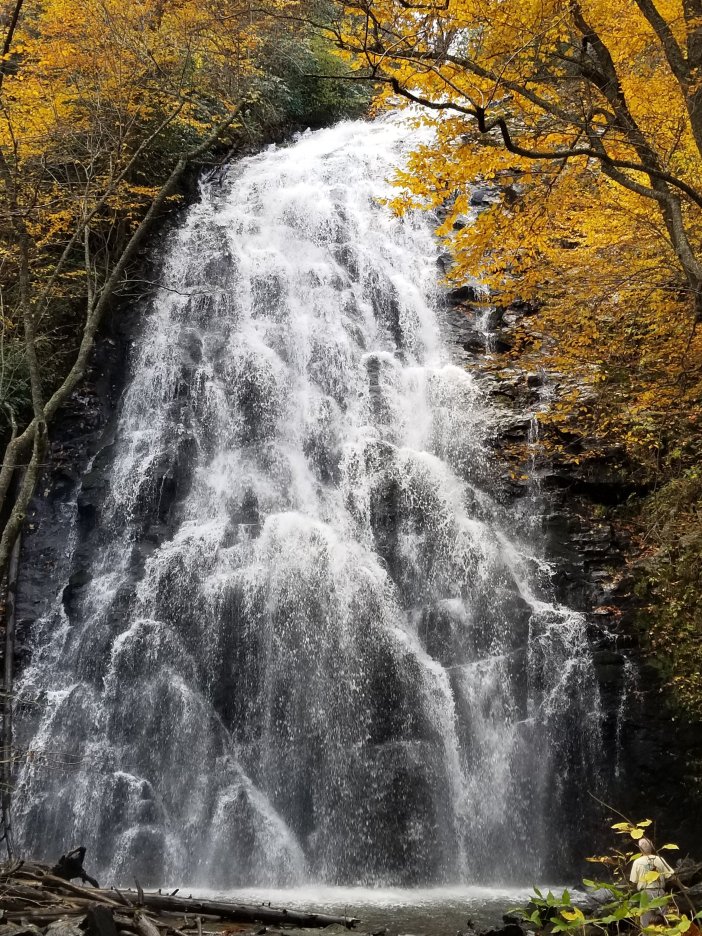 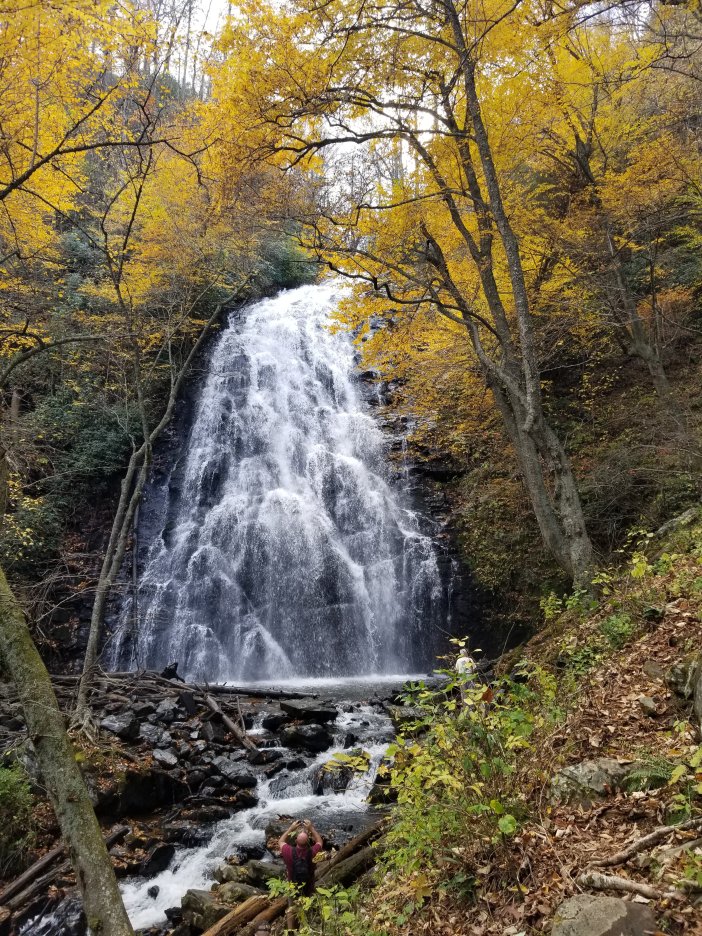 I was hoping to grab a first come first serve campsite at Crabtree Meadows Campground but it was closed. So I treated Pat to a parking lot site at Cracker Barrel in Asheville and her first shower in a tiny wetbath. 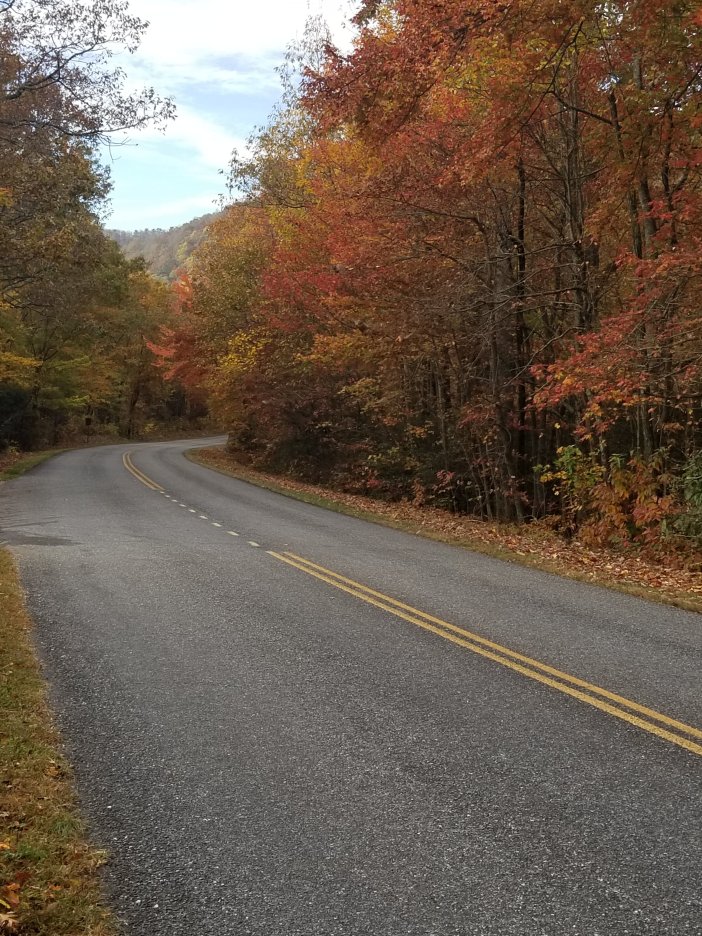 On Saturday we continued our way down the BRP to Mt. Pisgah campground and were able to get a site for the next couple of nights. We started a 7+ mile hike to the top of Mt Pisgah. I told Pat we could turn around anytime she wanted to. But she decided she wanted to do the whole thing. Little did we know that it would involve climbing about a mile of stone steps to the top of the mountain. Again the trail was crowded and there were dozens of people at the top, but the view was filled with beautiful fall color.

As I am laying in bed last night I hear something out side. I think to myself that is sounds like a bear getting into someone’s food. When I take Berkley out the next morning the guy in the camp across from me tells me that a bear dragged his cooler off into the woods. He had some food in it and left it outside all night. Everyone of the sites here has a bear box to store your food in it. People are so careless. Pat talked to some other campers and they told her that the bear had also gotten food from other campsites on previous nights. Most likely the bear will have to be killed now because of careless people. 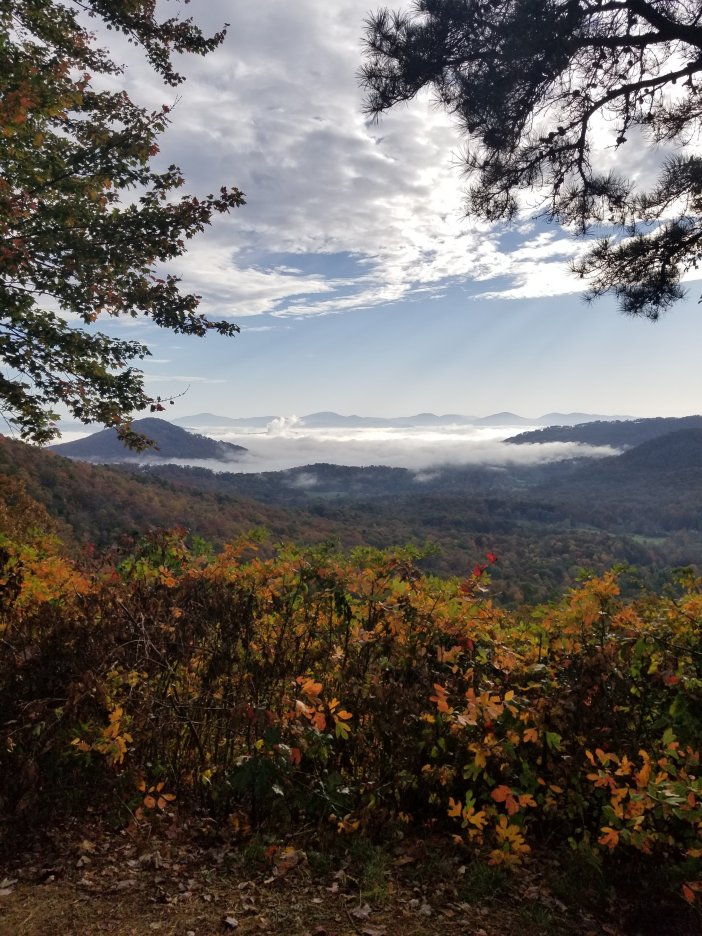 This is all a new experience for Pat. She has never done any hiking before so she is pretty sore today (Sunday). It looks like it is going to be rainy for much of the day so she is going to get a rest day today before I drag her back out on the trails tomorrow. 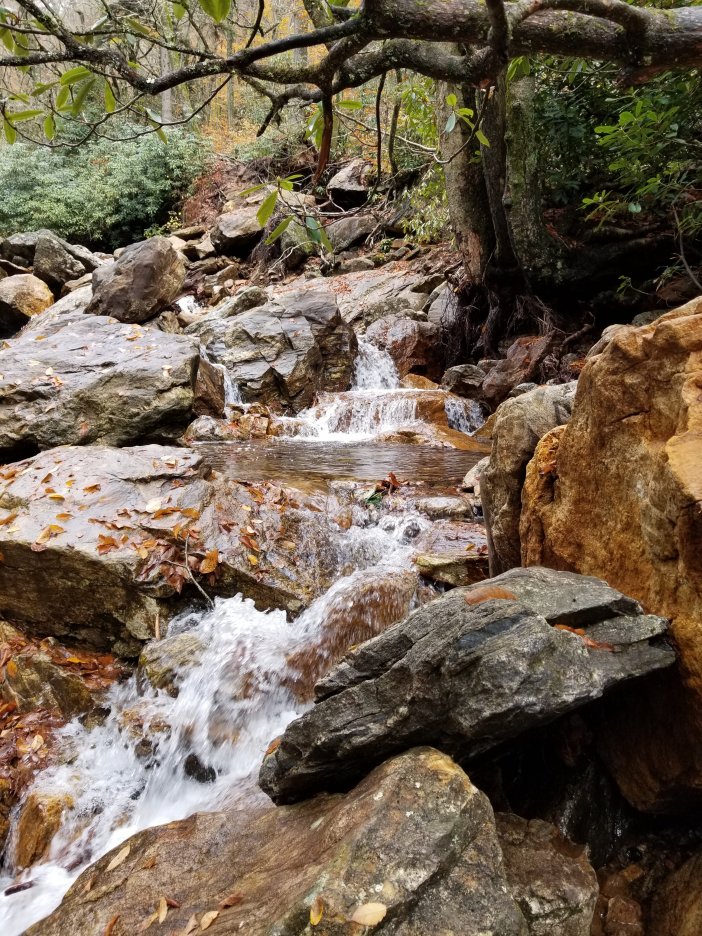 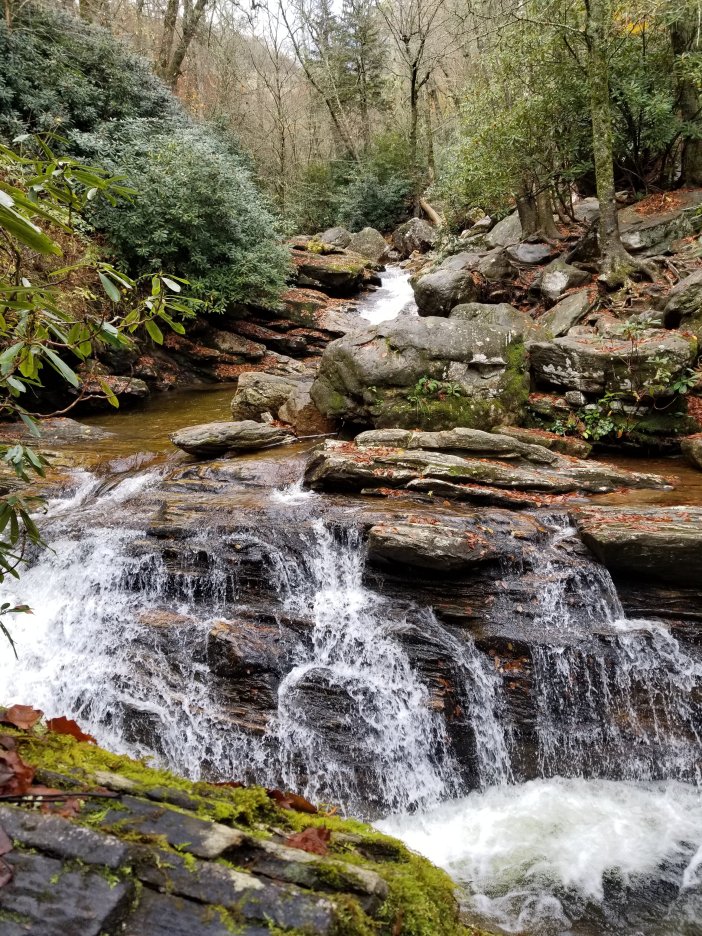 It rained almost all day yesterday. I got out for a few short walks with Berkley, but that was it. There was no hiking. It was still raining this morning at 4 am when he woke me up to take him outside. It was a quick pit stop then we both climbed back in bed until it was light out. 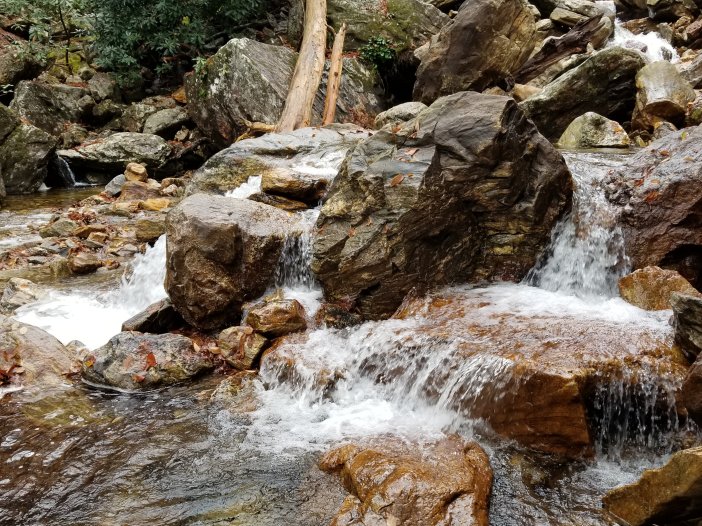 Today we got to see a couple of very nice waterfalls. I have seen them both before and would view them regularly if I could. The first was a short hike to Skinny Dip Falls. It is located at MM417 on the BRP. You also have a view of Looking Glass Rock from the same parking area. 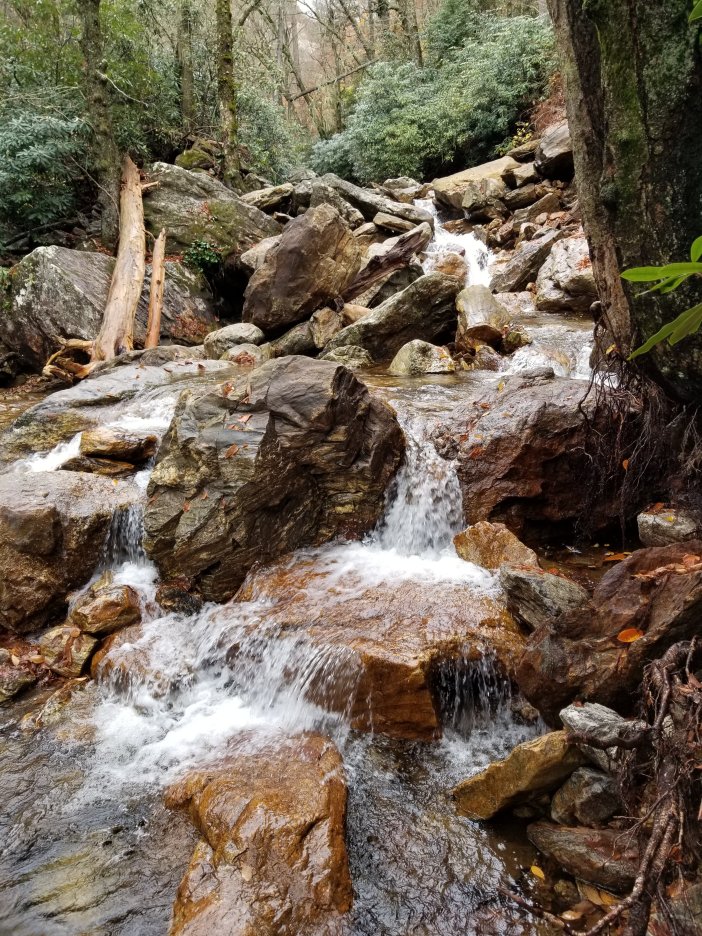 We also saw Looking Glass Falls. A waterfall located about 10 miles off the BRP on 276. It is a roadside waterfall, with a massive amount of water flow. 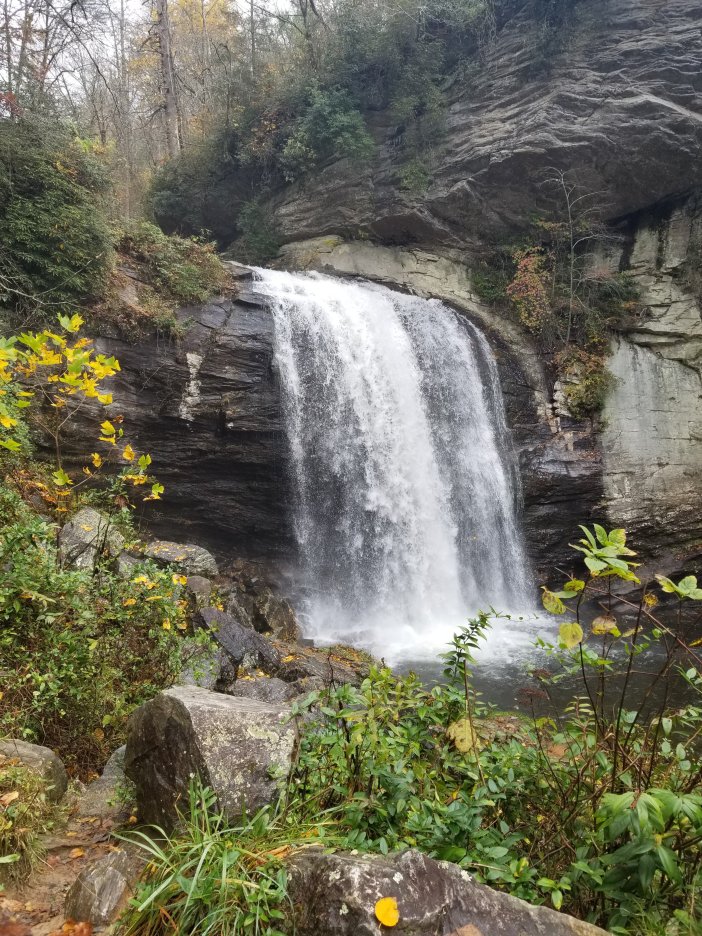 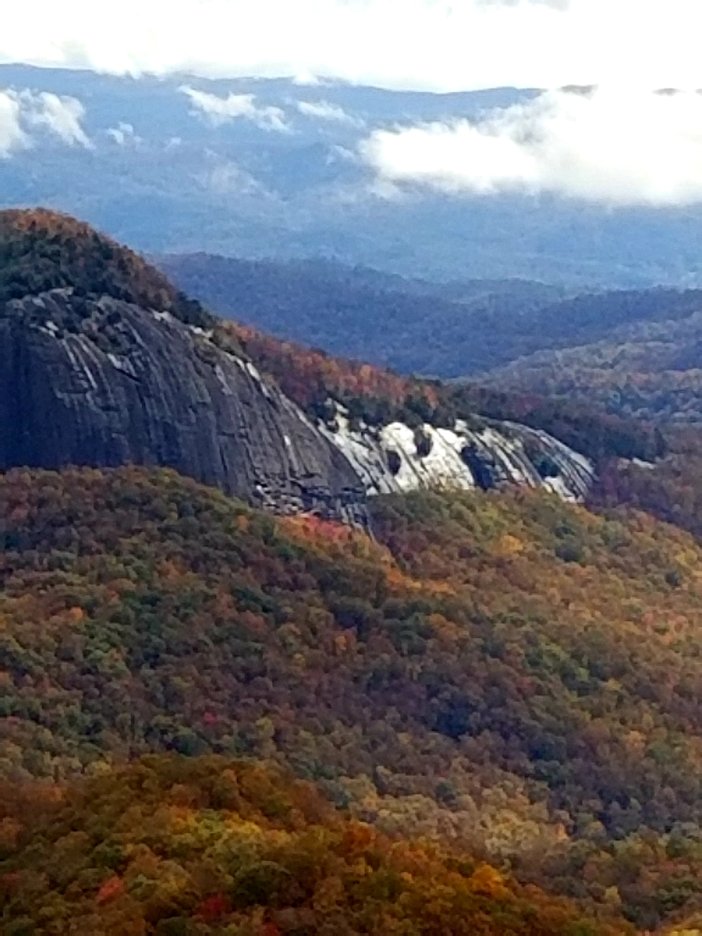 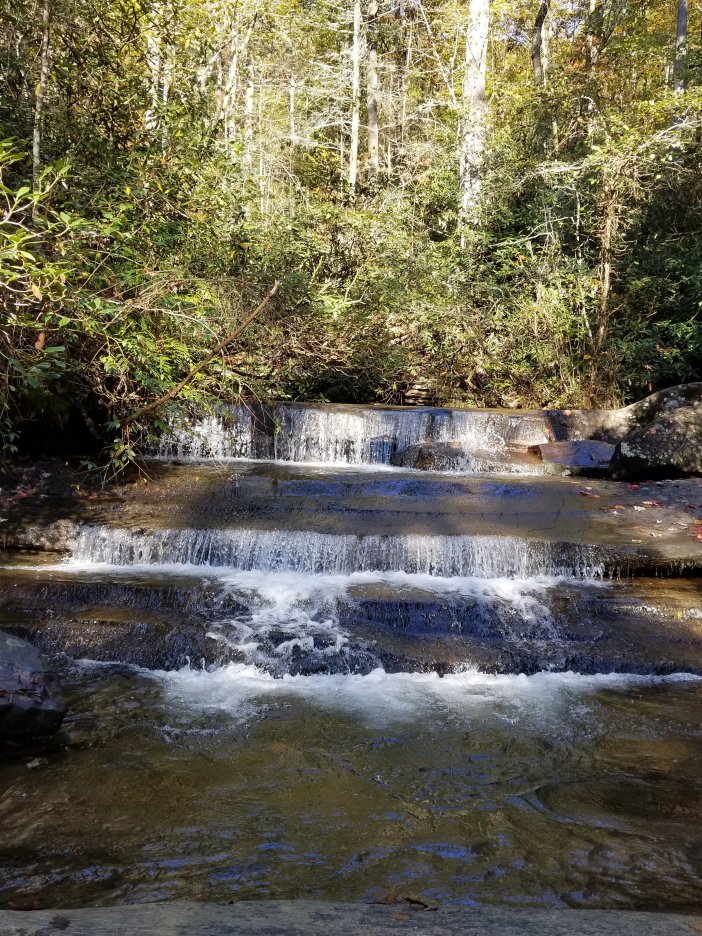 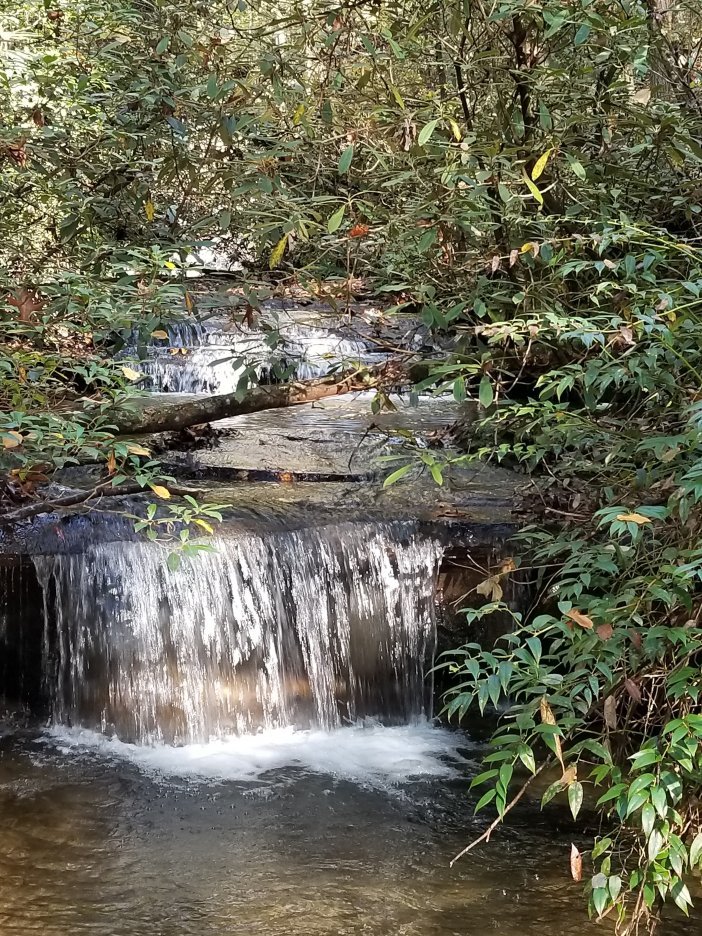 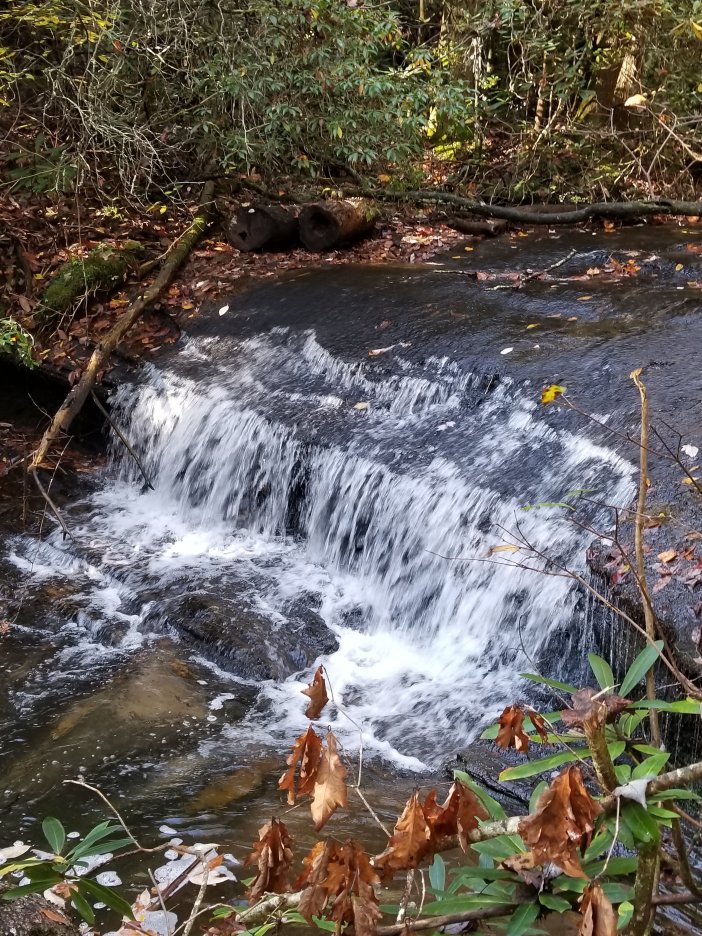 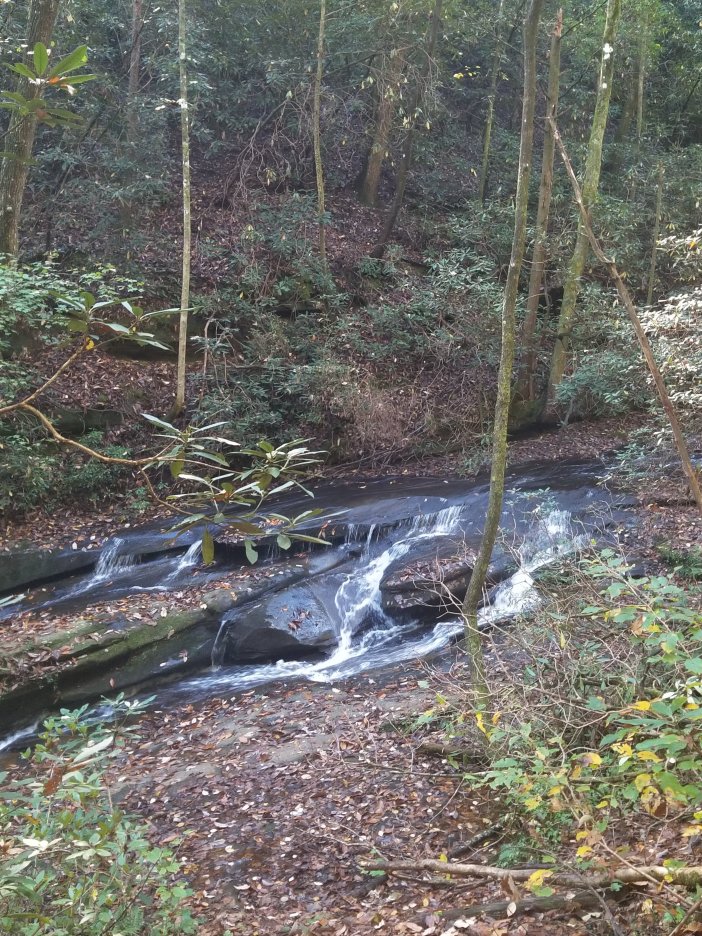 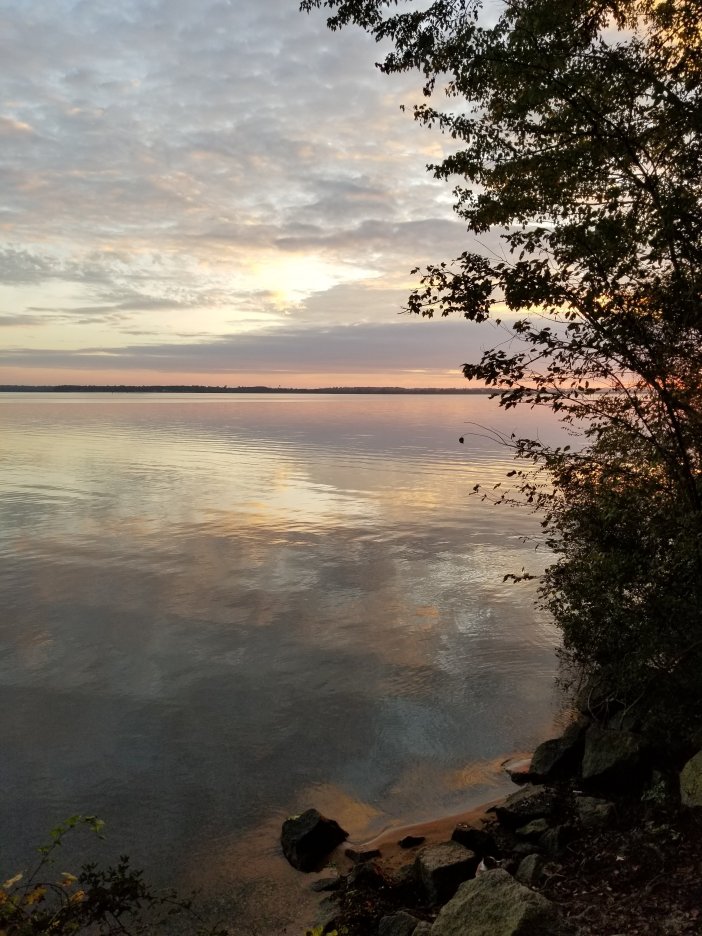 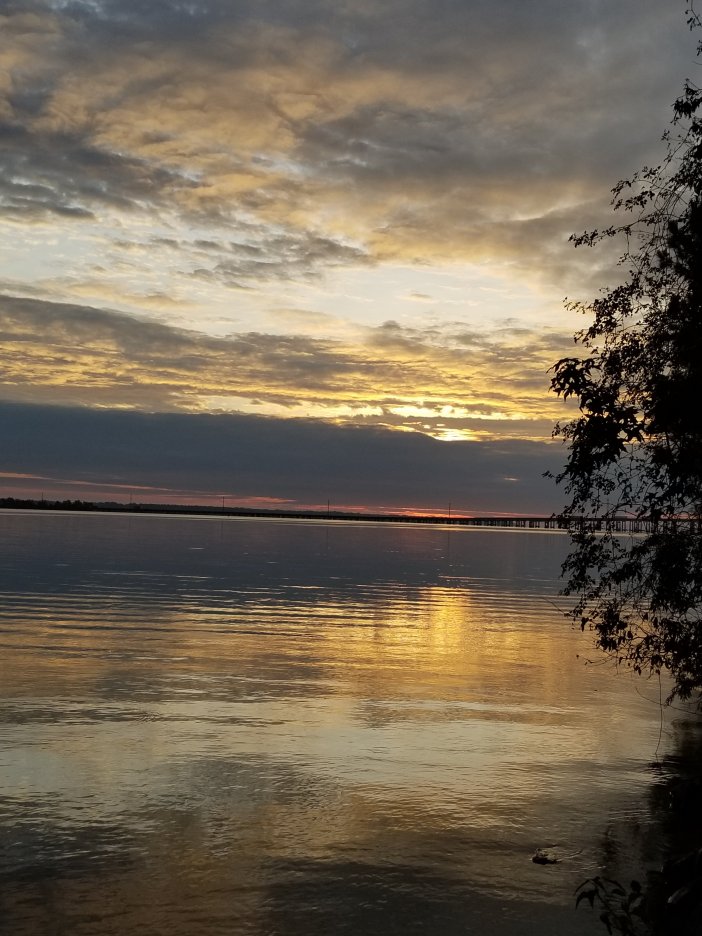